Skip to content
Vacations makes such a lovely time to read… (books 7, 8 and 9 all read on holiday.)
Bad Blood, by John Carreyrou. Pub. 2018
I had some 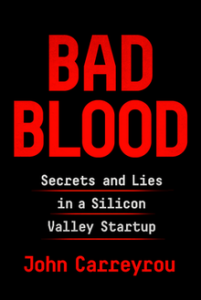 what followed the dramatic rise and fall of the brief career of Elizabeth Holmes, Silicon Valley wunderkind cum con artist. I had heard of her a few times in my career, but only just as a woman-in-business-in-engineering, but nothing earth-shattering. In 2014, like many people, I read the long profile of her in The New Yorker and, like not enough people, thought, “sounds unbelievable.”
The following year, it was revealed that the empress was naked – her multi-billion dollar company was founded on a stack of lies and doctored reports a mile high. The author of this book is the investigative journalist who had a similar and more serious reaction to the story a few years earlier, and investigated till all was revealed. The technology was indeed too good to be true, investors had believed in the charisma of the personality and not considered the likelihood (or not) of the business plan and the technology. The writing is okay (a bit colloquial in places, a bit repetitive in others), but the story is a fascinating expose, a whodunnit of the business and tech world.
I was reminded of one of my favourite books from last year – The Rule of Stephens, about a female biotech entrepreneur in Vancouver who is the polar opposite of Holmes. From Forbes cover to fraudster in just three years, Holmes is not only a cautionary tale for inventors and investors, her trail of deceit and personality will ultimately make it that much harder for new up-and-comers to get a break. Like any hoax, the long-term impact is on those who try to play it straight.

1 – title includes a body part (if we can count blood as a body part)
3 – a book published in 2018
6 – an author’s debut book
8 – a book that is being made into a film (of course it is)
24 – a book by an author I’ve never read before
25 – a non-fiction science book (there is quite a bit of it in this book, mostly about the technology’s impossibility)