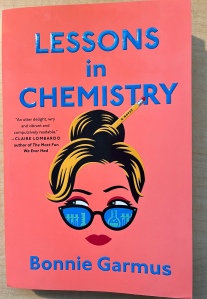 I received this book as part of my Christmas book bounty from my sister. Unlike all the others, this one was not on my wish list, but I had heard about it online. It seemed like a nice light story, so I dove in ahead of some other weightier tomes on this year’s reading list. It was an easy and enjoyable read.

The story centres on Elizabeth Zott, a scientist in the early 1960s who experiences the full gamut of sexual discrimination and harassment difficulties of that era. From sexual assault and victim blaming to being denied opportunities and work based entirely on her sex, Elizabeth tries to maintain both her dignity and integrity in a grossly unfair world. Amid that, she meets and falls in love with a most unlikely match, only to experience even more hardship. Those around her believe she’s only after the man’s fame and fortune, looking to “ride his coattails” to the top. Nothing could be further from the truth. Elizabeth is a brilliant researcher and a determined woman looking to make her own way and name. Along the way, she gains her own fame and fortune by applying her chemistry knowledge in a cooking show, where she educates and emancipates in her direct and unique style.

Having worked in a similar environment to Elizabeth (albeit not as a scientist), I can see many areas where there has been progress, but also occasional glimpses of that “old school” mentality. Like the time I asked a group if they needed anything else before a meeting, and the visiting senior scientist said, “yes, I’ll have a latté.” Or the time a female scientist was being marginalized for speaking out on the same issues and with the same vigour and tone as her male counterparts. With those experiences in mind, at times I found Elizabeth’s approach and response to the discrimination she faced appropriate and on point, especially her persistent “why” or “explain that to me” responses; other times, she tended to lecture or threaten, approaches that ultimately failed, and regardless could only ever have won the battle, not the war. She also lacked the spirit of collaboration even in the face of competition or duplicity that is so essential to good science. Ultimately, she perseveres and succeeds but not without challenges and set-backs, which is the true path for anyone. And as with a good story, the villains get their comeuppance eventually.

Garmus does an excellent job in keeping the story centred on Elizabeth and balancing both light and heavy material with just the right amount of humour and pathos. The story and overlapping characters get quick complex at times, and the final resolution of the various puzzles is very well done. There are few moments where the dialogue becomes a bit unrealistic, with very direct exhortations by Elizabeth about discrimination and equality that feel out of place and time in some situations. However, they ultimately fit with the story and serve to emphasize the challenges and resolutions of her life.

I have slim hopes for the pending miniseries, as there are changes to several characters and introductions of new ones that signal some retrospective cleansing of the novel’s setting and story. That’s too bad because the story as written stands on its own as a mid-20th century comic-romance-feminist tale. Introducing more dimensions runs the risk of diluting Elizabeth’s trials and triumphs.

Fate: I will find another reader to enjoy this one.