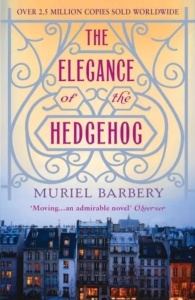 The Elegance of the Hedgehog, by Muriel Barbery. Pub 2006. Translation by Alison Anderson, published 2008.

This was a gift from my fellow book-clubber, and while it took me awhile to get into it, it turned out to be a nice little story of surprising friendships. Reneé is a concierge at an elegant Parisian apartment building. She keeps mostly to herself and has content but solitary existence alongside the elite tenants of the building. Paloma is a near-teenager in the building who is contemplating suicide to avoid what she sees as her inevitable fate – to grow up into a vacuous, vain, and avaricious person. Reneé and Paloma have something in common: they both conceal their true selves from the world, especially their intelligence and their philosophical explorations. An exotic newcomer to the building discovers their secrets and becomes a catalyst for each of them to live more boldly and openly.

Described in other reviews as a philosophical fable, the story certainly has that flavour. With strange characters and lessons to learn – especially about how revealing and being your true self is key to happiness in relationships and life – there are fable-like qualities, especially seeing Paris as a strange and faraway land from a Canadian perspective.

I enjoyed most of the book (as above, it took me awhile to get hooked on it), and was surprised and moved at the ending. I did find Paloma to be a bit annoying – too superior and yet immature – but perhaps that just reveal my own age and lack of time spent with modern pre-teens. I loved the newcomer – Monsieur Ozu – and would have liked to know him more, but it makes sense in the story that he remains mostly a mystery. There was a strange sense of timelessness in the telling, as there was little in the way of modern technology – only one person has a cell phone, which is odd even for the 2006 time period – or the influence of the larger world. Even the movies that they watch are on VHS! I adored the friendship between Reneé and the housekeeper, and their reverent consumption of tea and pastries.

Fate: I will pass this along to another reader.