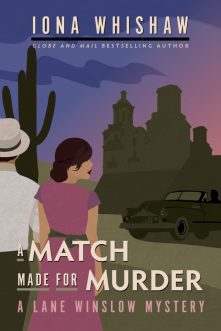 A Match Made for Murder, by Iona Whishaw. Pub 2020

Book 7 in the Lane Winslow series features the honeymoon of the Darlings, as well as the emergence of leadership from newly minted Sergeant Ames. The Darlings head to Tuscon, AZ for their honeymoon and, as one would expect from Lane, murder and mystery abound. Lane witnesses a murder and a few shifty guests at the hotel, and with Darling’s reluctant participation the seemingly separate crimes are neatly brought together. With dual plot lines – murders in each of Arizona and BC – there is also a connection across time and geography that places our heroes at the centre of the multiple stories, tying everything up nicely at the end and also setting up the next instalment well.

A theme in this book is emancipation of women. Of course, Lane and Darling’s marriage is unconventional in several ways, not the least of which is her determination to retain her Winslow surname; I liked that, while she maintains this, she doesn’t bludgeon people who blunder about it. There are other characters who represent the emergence of independence, including Tina Van Eyck (Ames’ emerging romantic interest parallels Darling’s faltering start of things with Lane) and Priscilla Barr (a victim of partner abuse who is helped to safety and freedom by Lane). Any editorializing about this is in character for Lane and in keeping with the plot lines, and so fits very well with the story.

As an additional social and historical theme, the overlapping murders in Arizona and BC provide opportunities to look at racial discrimination of the times. Throughout their honeymoon, the Darlings are exposed to – and repulsed by – several instances of prejudice towards Hispanic members of the community; again as we’d expect, both Darling and Lane flout the locals by unabashedly crossing racial and class lines, befriending and championing good people everywhere. In Nelson, we are introduced to a new character; Constable Terrell is the replacement for Ames following his promotion to sergeant, and he also happens to be black. From Nova Scotia originally, he is subject to a moderate amount of direct and indirect discrimination from colleagues and citizens, all of which he endures with aplomb and tact. Ames is having none of it, and works diligently and bravely to ensure opportunities for training, recognition of excellence, and both public and private camaraderie.

The pacing and complexities of this book are excellent. There are lots of twists and turns, red herrings and cul-de-sacs, and excitement, all kept realistic and clever. The linkage between the Arizona and BC stories could have felt contrived, but Whishaw delivers the reveal of the connection with deftness. As with previous historical social themes explored by Whishaw, the influence and impact of these on the story is present but does not dominate the novel; rather her stories reflect the social milieux of the times and location and how those influence the characters and situations, and includes clear commentary through the characters without making any of the stories “about” those social issues or ills.

The ending is a great set-up for the next book, with the promise of a new domesticity for the Darlings, a delightful new character in Terrell, and resolution of romance for Ames. There are just two books left in the series (#9 was published earlier in 2022), and so I hope to finish them shortly to pass on to another reading buddy.

* By mutual agreement with my book club buddy, these books and a few others that are on-deck (mostly in the category of murder mystery) won’t be included in this year’s book count except in extraordinary circumstances. These books are quick reads, more entertainment than engagement, and after a few will no longer fit in any of our diverse categories. So that I don’t lose track of them, I’ll still document them here and at year-end, but ultimately most won’t “count” for the list.