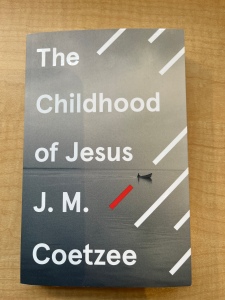 The Childhood of Jesus, by JM Coetzee. Pub 2013

I don’t know what I was expecting with this book. I thought perhaps it would be a take on the childhood years of Jesus Christ, a period that is not covered in any great detail in the bible and so subject to much speculation, conjecture, and fantasy (a great previous example of this was Lamb, the Gospel According to Biff, Christ’s Childhood Pal). As I started this book, I learned it was more of an allegory or alternative/modern day version of the story, with many deviations (not dissimilar to the Hogarth Shakespeare series and the retelling of those familiar tales in more modern settings, including the excellent MacBeth and Hag-Seed). The Childhood of Jesus is the first of a trilogy (upcoming are The Schooldays and The Death).

With spoilers: in this story, we meet Simón and David when they appear in an unidentified country at the Novilla centre for refugees to begin their new lives. 5-year-old David is lost from his parents and has no records from or memories of them. Simón has taken on responsibility for David, serving as his guardian, godfather/uncle, and the person who has taken on the task of finding David’s mother.

In this new world, everyone is “washed clean” of their past, to rid them of any stain or conflict from that. They arrive with no memories of their past lives, including of their families, friends, homes, or jobs, and when they are given new names upon arrival, they forget their original names, too. However, this “washing” has also removed any passion or drive for love or contribution or knowledge; they know the basics of functioning – how to eat and sleep and take a bus, that they need to work and interact with others – but otherwise are blank. Everyone now just wants to “be”. The society is a somewhat benign but boring version of socialism. There is no explanation as to the “why” or “how” of this place (who set this up? where is it? who is in charge?), and at no point do we learn why anyone has made the journey from where they were to this new place. There is a persistent sense that this place isn’t real, that perhaps this is an afterlife of a kind or an alternative consciousness, perhaps for Simón or for the strangely omnipresent (maybe omniscient?) but anonymous narrator.

And for no apparent reason other than to tease the reader about where this place is, the only language is Spanish.

Simón eventually “finds” David’s mother – a unusual woman called Inés – in a very strange way that is both unsettling and understandable. Once it’s been decided that Inés is David’s mother, she just is. After some tumult around school and friendships for David, the strange little family flees the city, heading North in search of a place called Estrella, where they can wash clean and start again. Along the way, they pick up a hitchhiker named Juan, who will stay with them through their journey.

The connections with the bible story of Jesus Christ are in some places obvious and in others only (but powerfully) symbolic. David is precocious in the extreme, pestering everyone with ‘why?’ questions all the time and believing that he is so special that the constraints of the world (death, gravity, math, physics) do not apply to him. Whatever their own flaws, one develops considerable sympathy for Ines and Simón (and by extension, for Mary and Joseph) for having to raise such a child. Perhaps even more so for Mary and Joseph, as they knew Jesus was “special”; for Ines and Simón, they have only their own instincts, along with a sense of responsibility for the child they have “created”; from their perspective, they see that their own indulgences of David have contributed to this specialness and the attendant challenges that brings.

Other interesting connections to the bible stories:

A key difference between David and Jesus Christ is kindness, but that could be just the difference in maturity. At 5, David is quirky about his things, his friends, and the structure of his life; but he can also be mean, petty, and selfish, again just like a 5 year old. It is hard to imagine Jesus Christ, even as a child, throwing a temper tantrum, refusing to eat his supper, or saying very un-nice (and also untrue) things about his friends and teachers.

Near the end, there is a very interesting philosophical passage that has had me thinking about individuality. David struggles with math, particularly the abstract concept of numbers as representing things. He cannot understand one apple plus one apple equals two apples because, in his mind, each apple is an individual so you cannot say there are two of them because that suggests or requires that they are identical. This concept comes up several times in the story but is only made explicit when he’s removed from school, near the end of the book; earlier, David struggles with the concept that there are other dogs than his own, other horses than the one he has seen in the neighbourhood, or other books than the one (a children’s version of Don Quixote) he has. There is some very interesting food for thought here in about group identity and how it can damage or mask the sense of the individual or any individual experience. I found myself agreeing with David, that we diminish things or people when we treat them as the same as all other things in their “group”; but I still know 1 + 1 = 2.

The ending is a set-up for the next book in the trilogy, and while that could have been unsatisfying, it is more appetizing and enticing. I do want to pick-up with this strange band of travellers, both to see where they go but also to see how Coetzee weaves more of the familiar elements of the life of Jesus into these settings and characters.

As for the writing and story overall, I really liked it. I found the flow and pace of the story to be good, the characters are interesting (I wouldn’t go so far as to say likeable, but from what I know about the bible stories, I probably wouldn’t have liked Mary either). The style is engaging and creative, with enough description and imagery to bring the world of Novilla and the people to life but not too abstract or prescriptive. Like with other newly found authors that I’ve enjoyed, I wish I’d found Coetzee sooner in life, but there is now a whole new-to-me oeuvre to explore.

Fate: I’ll be hanging on to this one while I make my way through the rest of the trilogy, so fate is still to be determined.