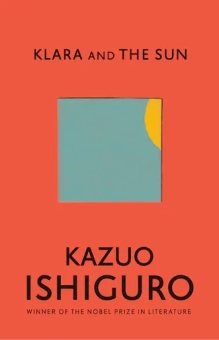 I selected this book as a Christmas present, based on my recent reads of other Ishiguro works. Oddly, I have not read his most famous, The Remains of the Day, but I suppose that will happen eventually.

Klara is an android/robot, known in the novel’s world as an artificial friend (AF). AF’s depend on the Sun for their power, and have a certain amount of sentience, which is what makes them desirable human companions. They have intuition and can learn, and form true attachments to their companions. Also in this world, versions of AFs are replacing large groups of people in many workplaces; this has led to some social upheavals that are left largely on the fringes of this story. Lastly, genetic editing of children (a step call “lifting”) can be chosen by parents early in a child’s development. The process that will give their children advantages and privilege in the future (such as preferential access to college, protection of jobs, and greater social prospects and prominence) but comes with the high risks of significant illness and death.

Klara is selected by as an AF by Josie, a lifted teenager who is preparing to finish high school and go to college but is struggling due to illness and against the strictures of society (which frowns on, among other things, relationships between lifted and unlifted). Josie’s mother is at first reluctant to have the AF in the home but soon comes to value Klara’s involvement with Josie, and her struggles and fears about Josie’s future are restrained but palpable. We learn later that Klara’s potential value, in learning about Josie’s habits, behaviours, and even her walk, may also be as an eventual pseudo-Josie; in the event that Josie does not survive her illness (a fate that befell her older sister some years earlier), Klara would “become” Josie in the form of an android “portrait”. This creepier intent is kept secret from Josie, and Josie’s estranged father (an engineer who lost his position to an AF several years earlier and is understandably hostile to the androids) is adamantly but powerlessly opposed to the scheme.

Klara’s overall purpose is Josie’s happiness and wellbeing, and so she is keen to find ways to make her healthy or make her endure. Due to her dependency on the Sun for her own power, and her observations and conclusions about the quasi-God-like power and personality of the Sun, learned during her own development years, Klara comes to believe that she can make a deal with the Sun: to provide his “healing powers” to save Josie in exchange for a sacrifice from Klara, and so she comes to believe that the Sun can save Josie. If that doesn’t work, then the Klara-as-Josie plan is something she is also willing to try, with her own skepticism about the likely success or longevity of that plan. Although an android, she has sufficient insight to see that she could be like Josie, but not “become Josie.”

In the end, Josie recovers from her illness and so is able to proceed with her lifted life. Klara, like a favourite childhood doll, is left behind as Josie grows up and heads out into the world. Klara is permitted her “slow fade,” as ultimate demise of AFs is called, and ends her days in a kind of AF memorial garden – sentient but immobile, reminiscing and reconciling her memories for decades to come.

The Klara-becomes-Josie plot line was surprising, and very interesting. Could artificial intelligence really learn enough about an individual human to become that human? As several of the characters ask, including Klara, what about the human heart and soul? How could the android truly know and be that part of someone that even that person can’t fully know or explain? This was especially interesting given the persistent discrimination against AFs in the society of the book – on the one hand, valuing the near-human engagement and empathy of the AFs, and on the other, treating them as unfeeling machines (one referring to the AFs as comparable to a vacuum cleaner). Definite shades of Blade Runner and Ex Machina here.

I really enjoyed this story. It combines the elements of Ishiguro’s previous works – sci fi, fable, female characters – in surprising ways, with wonderful and compelling writing all the way through. His brilliance is in creating familiar but flawed worlds that reflect the current reality, with relatable but surprising characters and situations. There is no editorial preaching, but social messages – about considerations of biotechnology, pollution and climate change, discrimination, and privilege – are prominent and clear without overtaking the story and characters. The novels cause you to think without telling you to think, or what to think. What I enjoy about Ishiguro’s work is the diversity of topics. He can do historical fiction, fable and fantasy, dystopia and sci fi, all equally well. Even more, I enjoy his portrayals of female characters as whole, complex, dynamic people. This novel is perhaps tangentially related to Never Let Me Go in that the society described has created a strange new class of persons specifically as disposable for the benefit of the elite. Both are dystopian and horrific, but at the same time eminently familiar. For the novels, those societies provide just the backdrop for stories of humans, human nature, and love.

Fate: will send to a friend who I think will enjoy it, as I likely won’t read it again any time soon.