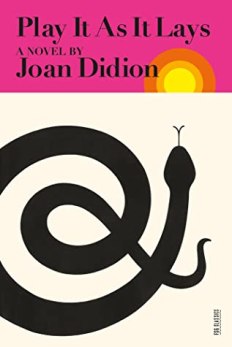 Joan Didion died in late 2021. While I had heard of her before – my impression was of an elite New York writer dissecting upper class America – I’d never been moved to learn more about her or her writing. Until I read an obituary of her that mentioned a famous quote of hers. Unfortunately, as so often happens with things read while meandering through the internet, the source and substance of that quote – as well as the article quoting it – is lost to me. However, it was based on that now-lost article that I sought out a book by Joan Didion for this year’s reading list. Another quick internet search pointed to this book as the place to start on Didion’s oeuvre. It was an interesting selection.

In 1970, Didion was better known for her essays describing the 60s “counter-culture”, but her highly anticipated second novel (her first was Run, River from 1963) was somewhat polarizing for its unusual style, which takes a bit of getting used to.

The story is about Maria, an actress, socialite, wife, mother, and troubled person in Hollywood. Maria is estranged from her husband (Carter, a director) over his frequent absences and infidelity, her recent affair with another Hollywood person, her subsequent pregnancy and abortion, and the ongoing challenges of dealing with their 4-year-old child who is in care for some unspecified reason. Maria proceeds to make a series of questionable decisions and bizarre actions, culminating in her committal to some other kind of care for her obvious mental health and psychiatric problems.

There is not a single character in the story that is appealing or likeable. They are universally selfish, vain, cruel, and lazy, and all unhappy for no good reason other than that their bar for happiness is set either unreachably high or so ill-defined as to be unachievable. Each is repeatedly asked to describe what they want or need from life or from each other, and each either lies, says, “nothing, I’m fine”, or remains petulantly silent. I think the reader is meant to have some sympathy for Maria as the centre of the story, but she gives as much misery as she gets and then some. Maria is also the alleged narrator of the story and is as unreliable as they come. For a while, I thought perhaps the daughter was imaginary – either never existed or recently deceased – but after a while realized that that was just me trying to come up with a way to feel sorry for Maria. 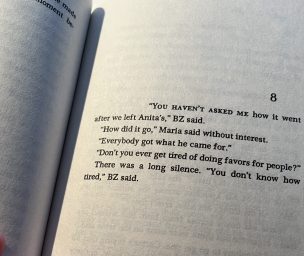 There isn’t anything especially revealing or novel about Maria’s experiences – one description I read was that this was Valley of the Dolls in short form – but the writing and presentation of the story is compelling and unique. The 84 chapters are all short bursts (not dissimilar to those in All the Light We Cannot See), and in a way the novel reads like a screenplay, highly appropriate for the setting and characters; you can imagine the missing bits of direction and location descriptions, and the typesetting enhances that sense.

I found this book reminiscent of two others. First is Bad Marie by Marcy Dermansky: a story about a similarly named woman who makes similarly bad decisions in her life, giving the reader the feeling of helplessly watching a train wreck in slow motion. The second is Go Ask Alice (which I haven’t read for >30 years, but I remember well): a fictional diary written to be a cautionary tale about teenage sex and drug use featuring a woman that makes bad and dangerous choices with destructive effects and tragic results (it is also printed on the same cheap paper in a similar typewriter-font). I was similarly reminded of the film version of Postcards from the Edge, Carrie Fisher’s semi-autobiographical novel of a more modern-day Marie based on herself. Ultimately, I found the overall laid-back California feeling of these stories – people in large houses in rich neighbourhoods with middle-class ennui who seek to make their comfortable lives difficult with bad choices and lots of drugs – to be unrelatable and dull.

Despite that disparaging description, I did enjoy this book – not love it, but was interested and entertained enough to read it quickly and completely, but I won’t read this one again and wouldn’t recommend it to a friend. I will seek out Didion’s non-fiction writing and perhaps a more recent novel, in a future year.