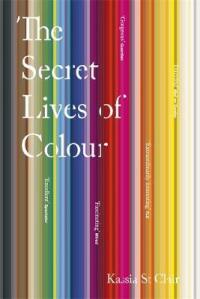 The Secret Lives of Colour, by Kassia St. Clair. Pub 2016

I’ll confess to having envy – I envy those who can see and use and interpret colours. Those artists who make something remarkable appear on a canvas or through a camera lens, those fashion plates who effortlessly look fabulous all the time, birdwatchers who can distinguish between the myriad species by the variances in plumage. This book provided some insight into the mystery of this world of shade and hue, with just enough history and science to read like an enjoyable short course into that beautiful world of colour.

St. Clair covers the entire palette from white to black, providing a story for the use, making, folklore, and endurance of some familiar and many unfamiliar colours. Some of my favourites:

Themes of alchemy and vanity run through many of these stories. So many of the earliest colours used in art, clothing, and cosmetics had their origins with mercury, arsenic, sulphur and all manner of toxic and noxious substances. The secret and arcane methods of production, many involving fire, lime, and ammonia (in the form of stale urine), and the hazards in both making and using the resulting pigments attest to the commitment of humans to aspire to youth and beauty at any cost.

Most of all, the hidden and quirky stories are interesting and well told, and so the book is a treat. Likely of even more interest to artists and fashionistas, but also for those like me who can only look through the window at the world of visual art.

6 – a debut book for the author