Time for another cinematic list. Since I’m putting a lot of effort this year (although clearly not right now) into reading, I thought a list of adaptations of novels into film, where the makers got it just right, would be apropos.

My rule for this list – I have to have both read the book and seen the movie. Here then are my dandy dozen: 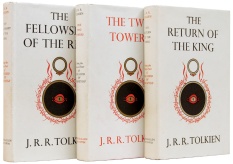 Lord of the Rings trilogy (2001-2003, Peter Jackson). Starring, well, everyone. Based on the novel series of the same name by JRR Tolkien, published 1954-55. I had not been a fan of the land of orcs and elves growing up, but as an adult the first movie in this series hooked me, and I read through the book series at a blistering (for me) pace. The movies did help me to visualize the locations, hear the voices, and accept as believable all the magic of Middle Earth. While purists quibble about portrayals and missing elements, I found the movie to be a perfect companion to and reflection of the Tolkien world. (The Hobbit, not so much…)

Out of Africa (1985, Sydney Pollack). Starring Meryl Streep, Robert Redford, Klaus Maria Brandauer, and Michael Kitchen. Based on the 1937 memoir Out of Africa by Isak Dinesen/Karen Blixen. One of the most stunningly beautiful films, it is one of my all-time favourites. The movie version is definitely an adaptation, as the book includes very little about the romance that is central to the film. (For diehard fans, the screenplay itself is worth a separate read, especially to learn the origin of the hair wash scene.) The film captures both the lush and savage beauty of Kenya and the less-than-beautiful commerce and elegance of colonial Africa, and keeps Dinesen’s voice throughout, portrayed flawlessly by Streep (that accent). The montage where she reads the poem “If I Know a Song of Africa” is exquisite.

The Bridges of Madison County (1995, Clint Eastwood). Starring Meryl Streep and Clint Eastwood. Based on the 1992 novel The Bridges of Madison County by Robert James Waller. This romantic tale of a four-day affair between an Italian-American war bride and a bohemian freelance photographer is a marvel. Streep is again flawless (again with the accent); she inhabits Francesca completely, with physical movements and turns of phrase that are perfect. Eastwood is similarly wonderful, portraying a vulnerability and romance so unlike his other gruff or violent characters. The movie is a perfect reflection of the novel, bringing to life the steamy heat of that Iowa summer in lovely technicolor. 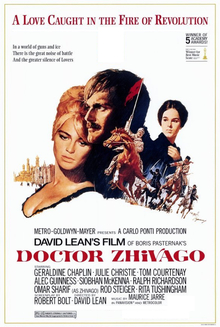 Doctor Zhivago (1965, David Lean). Starring Omar Sharif, Julie Christie, Tom Courtenay, Alec Guinness, Rod Steiger, and Geraldine Chaplin. Based on the 1956 novel Doctor Zhivago by Boris Pasternak. An epic film and novel, this sweeping story covers all the genres – war, drama, romance, history (albeit no comedy here). I admit that the novel was a must-read from high school, part of the grade 12 “fallen woman” trifecta (see also Tess of the d’Urbervilles and The Scarlet Letter), all of which had the advantage of having a film version to alleviate the reading burden and make quote memorization just bit easier. A key difference: the man (Zhivago) is the central character. But in all three, the central characters suffer most cruelly for their sins. The film portrayal of the love story against the backdrop of the Russian Revolution (it doesn’t get much bigger than that) is tragic over and over again, right to the bitter end. (The 2002 miniseries is a pale tepid attempt to remake Lean’s masterpiece.)

Possession (2002, Neil LaBute). Starring Gwyneth Paltrow, Aaron Eckhart, Jeremy Northam, and Jennifer Ehle. Based on the 1990 novel Possession: A Romance, by A. S. Byatt. While Gwyneth Paltrow is never my cup of tea, Jeremy Northam always is. And while I found the novel a bit tortuously long (if you include the many long poems in it, it can be a bit of a slog), I enjoyed it and so was delighted to see it adapted. The movie definitely more accessible and makes the poetry and intensity of the romance much more palpable, intercutting the old with the new romance very well. The film also heightens the mystery and suspense of the race to solve the puzzle and find the secret letters. 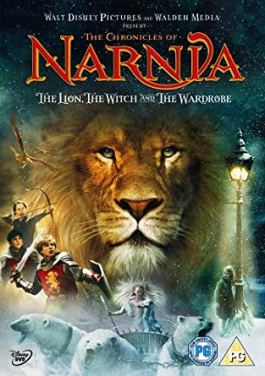 The Chronicles of Narnia: The Lion, the Witch, and the Wardrobe (2005, Andrew Adamson). Starring Tilda Swinton, James McAvoy, Jim Broadbent, and Liam Neeson (plus four others who play the children). Based on the 1950 novel The Lion, the Witch and the Wardrobe, by C. S. Lewis. Like the Tolkien world, Narnia was never a place I got into. Witches and talking animals were not for me. However, seeing this breathtaking film sent me

scurrying to the books again, and at last the joy was revealed – I got it! The four children are admirably portrayed by actors bearing a striking resemblance to the Windsor royal family. To see Tilda Swinton as the White Witch is to quake with fear and shiver with cold. And to hear Liam Neeson growl and purr as Aslan is to shiver for altogether different reasons. Minor licenses between book and adaptation aside, the film is excellent. (Even better, if you are able to see this year’s Pacific Theatre’s two-person production, you won’t be sorry. It is a delightful magical play that brings the fantastic story to life as only theatre can.) 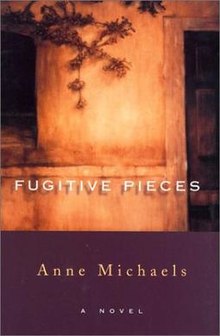 Fugitive Pieces (2007, Jeremy Podeswa). Starring Stephen Dillane, Rade Šerbedžija, and Rosamund Pike. Based on the 1996 novel Fugitive Pieces, by Anne Michaels. This is this first on the list that is one of my all-time favourite books. I have loved Fugitive Pieces from my first read of it and have read it so many many times since then. It is a lovely lyrical novel full of love and tragedy, that always moves me to tears. When I heard it was being adapted, I was dreading the monstrous outcome of putting page to screen. And while the end resulting movie is not great, it is not horrible, and it is a good and faithful adaptation, clearly made by others who love the book almost as much as I do. 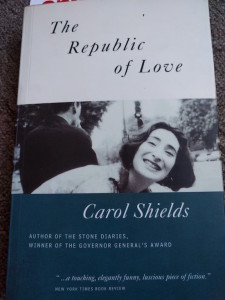 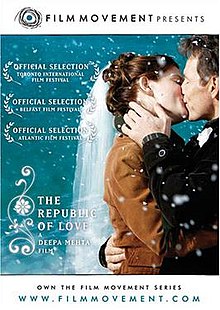 The Republic of Love (2003, Deepa Mehta). Starring Bruce Greenwood and Emilia Fox. Based on the 1992 novel The Republic of Love, by Carol Shields. Another all-time favourite, another where I was similarly and (mostly) needlessly trepidatious about a film adaptation. While the story is migrated from Winnipeg to Toronto, it is otherwise a faithful adaptation led by a loving hand. And who wouldn’t fall in love with Bruce Greenwood as Tom, with that dreamy radio voice… 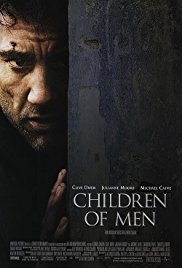 Children of Men (2006, Alfonso Cuarón). Starring Clive Owen, Julianne Moore, Michael Caine, Chiwetel Ejiofor, and Claire-Hope Ashitey. Based on the 1992 novel The Children of Men, by P. D. James. Unlike my other favourites above, this is a favourite novel that I was hoping would be adapted for the big screen, as the premise and scale of the story are epic. Despite the considerable license with the story, the film did not disappoint – it realizes the gritty hopelessness and maniacal hubris of the end of mankind in a stark and familiar setting (and blessedly did not migrate it to the US). I first read the novel in the spring of 1994. I was visiting England for the first time, and despite it being April, it was cold and snowing for a good chunk of time. My boyfriend and I decided to escape for a few days to the warmth of Tenerife (a quintessentially British thing to do) for the princely sum of £29 each. At the airport in Hull, I needed a book for the 5 hour flight, so I bought this one. (It was much better than even the best day in Tenerife.)

The Bourne Identity (2002, Doug Liman). Starring Matt Damon, Franke Potente, Chris Cooper, Clive Owen, and Brian Cox. Based on the 1980 novel The Bourne Identity, by Robert Ludlum. A fantastic action picture and the best of the Bourne series, the movie is a fairly faithful representation of the book, updated and adjusted for technology and societal roles. The book is an excellent spy novel (one of the best ever), a bit dated when read in the 21st century (I read it after seeing the film) but still a good story. The movie is fantastic, with one of the best car chase scenes ever and a portrayal of Bourne by Matt Damon that is powerful on many levels. 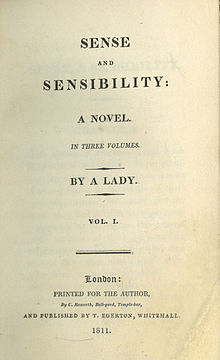 Sense and Sensibility (1995, Ang Lee). Starring Emma Thompson, Kate Winslet, Alan Rickman, and Hugh Grant. Based on the 1811 novel Sense and Sensibility, by Jane Austen. Another where I read the book after seeing the film, I enjoy the beauty of the film over and over again, much more than the book (which I like but don’t love). The casting, the performances, the whole look and feel of the film are transporting to 200-year-ago in a way both stark and romantic. The screenplay by Emma Thompson, with the accompanying diary from the filming, is also a great read for true lovers of the film.

The Shawshank Redemption (1994, Frank Darabont) and Stand By Me (1986, Rob Reiner). Shawshank stars Tim Robbins and Morgan Freeman. Stand By Me stars Will Wheaton, River Phoenix, and Kiefer Sutherland. Both based on stories in the novella collection Different Seasons by Stephen King, published 1982. I am not a big Stephen King fan. Prior to Different Seasons, I had only read one of his novels (Thinner, 1984) and that one still give me the creeps just thinking about it. But the movie Stand By Me was so good, I sought out the source material and read the entire thing. These stories are different – more thriller, less horror – and focus on the characters and personal relationships than on anything supernatural or scary. Even better than Stand By Me is Shawshank, a true classic film about loss, redemption, and relationships. Both films take a bit of licence with the stories, but little is lost and much is gained through this process, resulting in excellent movies that encourage viewers to revisit the source for more.

A Room With a View (1985, Merchant/Ivory). The film takes the best from the book and makes a warm cinematic environment with exceptional characters. The book was less enthralling, although the post-script about their later lives is very interesting.

John Irving adaptations. With the possible exception of The Cider House Rules (1999, Lasse Hallström), most adaptations of Irving’s novels have been mediocre verging on downright terrible (I’m looking at you The Hotel New Hampshire (1984, Tony Richardson) – not even an all-star cast could save you).

One thought on “Books on Film”