For Grade 6, it was back to the open area classrooms. Mr. H and Mr. Chaput moved up with our class, but I was moved down a bit into the more remedial stream, so Mr. Chaput became my homeroom teacher. I still struggled with homework, especially anything written, and with French. Mr. Chaput was very supportive and helpful, and I’ll always remember an after-school conversation with him about having to do work that we don’t enjoy: “there are some things that I don’t like doing, but if I didn’t do them, hey, I could lose my job. There will always be things like that – doesn’t mean we can just not do them.” Not easy to grasp when you’re 10, but that conversation and his words have stuck with me always. He was a great teacher and motivator, and he and Mr. H. made learning interesting and fun, even when it wasn’t easy.

Grade 6 would be a last year for a few things. It was also my last year of Brownie’s as I would “fly up” to girl guides. And it would be the last full year of teaching for Mr. H. – more of that in Grade 7.

There were also plenty of firsts, including science fair (I have 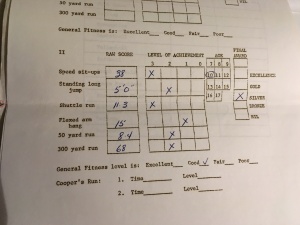 no recollection of my science fair project, other than the standard cardboard-box-display. I know it was not a volcano) and music classes, with the de rigueur recorder. It was the first year (for a while anyway) that I wouldn’t be class mates with Angie; she was a much better student than me, and so stayed with the “smart kids” in Grade 6, but we remained close friends, continuing with the sleepovers and good times. It was also the first year of the Canada Fitness Test, where I, unbelievably, received a silver award. 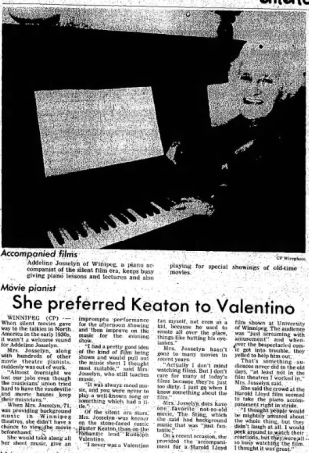 Early the previous summer, I started taking piano lessons outside of school. Mrs. Addeline Josselyn was my teacher. I remember her as one of the oldest people I’d ever seen (she was only 71 at the time), but she was a master of the piano keyboard. She started playing as a young girl, and worked playing piano in the silent movie days, so she mostly played from memory but she could also play anything at first sight. Like with most things at that age, I was neither a natural nor a gifted student, but her lessons in reading music, the importance of practice, and the beauty of having a diverse musical palette have stayed with me always.

It was also my first year with glasses. Sadly, I don’t have a school photo from this year, but I remember those first glasses with their springy arms and world-altering views. It was 40 years ago, but I can remember the disorientation of the first few days – the funhouse feeling of the world tipping and sloping away as I walked – followed by a new world of clarity in reading and seeing.

Grade 6 would also see another significant growing-up moment – my parents’ separation (to be honest, I don’t recall exactly when this happened, but various other memories and mementoes point to a time in the spring of 1978). The undercurrent and eventual upheaval at home likely affected my performance in school, although I can’t point to a specific instance where that disruption was direct or understood by me or others. My mom worked hard to put as positive a spin on things as possible, encouraging me to be interested and excited in her own new adventure, and I did have a curious admiration of her new Mary Tyler Moore-like lifestyle, while not truly appreciating until I was much older, with the benefit of hindsight, the impact that those changes had on me.