One of a collection of items kept in the brown suitcase, this small box contains a diverse collection of buttons, badges and lapel pins from various points in my childhood. Spilling the box out was little trip down memory lane. Various pins and buttons from places lived, events attended, and memorable dates, I remember having an idea about making a quilt or display of some kind for the whole set, but this old stationery box became the repository of these memorabilia. Some highlights:

In Grade 7, a school trip was to Camp Arnes, one of those things that likely wouldn’t happen today (a Christian camp, with the liability of outdoor activities). Three days and two nights, in late winter, with a hay ride, horse-back riding, archery, and a large collection of giggly girls in a bunkhouse with just two exhausted chaperones (the student-chaperone ratio of 15-to-1 would also likely not past muster these days). The weather was unseasonably warm, resulting in lots of muddy walks, very wet boots, and some very poor cross country skiing. Despite all of these activities, my highest distinction apparently was my relative tidiness.

Winnipeg had the thrill of being one of the North American sites well positioned to view a solar eclipse on 26 February 1979. The event was planned for with all the pomp and circumstance of a papal visit (which would happen in Winnipeg 5 years later, so perhaps this was dress rehearsal). The event was a great opportunity for science classes across the province to study the solar system, the sale and distribution of pins and special glasses, and odd prediction of the end of the world. In the end, after all the admonitions against looking directly at the sun during the eclipse, few of us actually saw the event directly, but through a mixture of shadows on paper, and other contrivance to protect our eyes. The best views turned out to be on television that evening. And life proceeded as usual 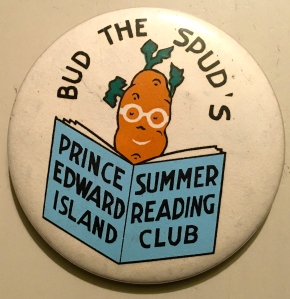 In the summer of 1979, we moved to Souris, PEI. As my sister, brother and I sought out things to do as we got to know our new town, we tended to the local library to keep occupied during long summer days, at home or the beach. The library encouraged reading with Bud the Spud (along with Larry the Lobster, whose pin has gone astray). Bud and his pin bring back memories of that hot, lazy summer in small island town, exploring the dusty streets and adapting to a new home.

In the late seventies, Canadian schools ran the Canada Fitness Award program as part of regular gym class – another program that likely would no longer be permitted in today’s schools. The six-event test covered endurance, strength and running (sit-ups, 3 variations of a short run, a standing long jump, and the dreaded flexed arm hang). While never known for my physical prowess, I did earn a near-complete collection of award badges (alas, an Award of Excellence was forever beyond my reach).

Grade 10 was my first year at a new school, St. Mary’s Academy. The annual drama production was a big quasi-professional production, complete with marketing. The Spring 1982 production was of the Broadway musical, The Boyfriend – a wonderfully appropriate story for an all-girls school. The productions were popular due to their high quality, but also  their cross pollination with the associated boys high school; the presence of male students in the building was enough to turn things upside down. My role in this production was very minor indeed – I was the curtain puller – but was part of the backstage crew each evening, and so enjoyed participation in all the drama and excitement in the wings and the unique side-view of the show. And I still remember many of the songs (“we’ve got have, we plot to have, for it’s so dreary not to have, that certain thing called The Boy Friend…”)

The summer between Grade 11 and 12 (August 1983) included a most exciting school trip – New York City! It turned out to be my one and only trip to the Big Apple, and I indulged in all tourist attractions possible in the brief afternoons. We had a surprising amount of unsupervised time, and made the most of it by, of course, shopping. Evenings included Broadway shows (a Sandy Duncan revue at Radio City, and the original Broadway production of Cats at the Winter Garden Theatre), and late nights up with the older girls, watching unfiltered American tv and feeling very grown up in the Big City (even though we were staying in New Jersey). The “I ❤︎ NY” logo seemed the quintessential badge to bring home.

Two other highlights of high school were the musical stylings of The Nylons (not exactly popular, but enjoyed by me and my buddies) and Bloom County, an at-the-time new comic that felt very new and sophisticated in the early eighties. I attended a concert by The Nylons with my fellow music lover Heather, and so the badge. Heather was also a Bloom County compatriot, and she gave me the pin depicting a version of Opus.

The rest of the collection is similarly nostalgic, commemorating parades, camps, events and trips through my early and teenage years, and fitting neatly in to a box in the suitcase of memories. Like so many of my odds and sods, each trinket is a small but meaningful trifle. And I’m so very glad they’ve persisted and remained together.