I’ve never been quite sure what to call this item. I don’t recall where it came from or how I came to have it. I don’t remember getting it, just always having it.

This is not a valuable ceramic by Doulton – just a made-in-Japan (literally) trinket. I remember as a kid being fascinated by the tiny bowls on the table, so tiny that I could fit my pinkie finger into each. While the religious message was clear enough – give us this day our daily bread – the diorama provided what was perhaps my earliest exploration of curiosity and imagination.

What happened to the girl’s other pigtail (one is broken off, the only obvious damage on the entire thing)?

Why are their legs so short/non-existent? Perhaps, like the Japanese who made this, they are sitting on the floor.

What is in that pot on their table – thick and creamy oatmeal, a hearty beef stew, a meagre soup? And where are the utensils? Perhaps again the Japanese influence – a pot of miso soup.

Is their prayer one of thanks for the bounty they’re about to receive, or a plea for a long-needed meal of nourishment? 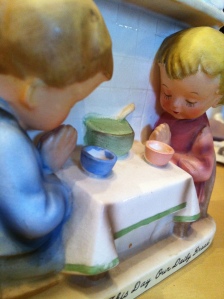 Oddly, I’ve never named the children, or even speculated as to their family, nationality or age. Even now, I draw a blank when thinking about a specific name for either girl or boy. They’ve always just been “two kids praying”, unnamed but meaningful to me.

There are some lovely details on this piece. The faces of the the children, their hands at prayer, the painted plates above them, the tile wall – all give this likely cheap item a delicacy and specialness that has made it a treasure for me. There are holes in the back of this, as if it is intended to hang on a wall in a kitchen or eating area, but I’ve always been loathe to hang it for fear of it meeting an untimely demise on my counter or floor.

The mystery of its origin is also part of its intrigue to me. It is likely that this was from one of my grandmas and so perhaps was theirs at one time (there are other objects in my life of similar provenance). Perhaps I admired it, or repeatedly requested to see it, and so it eventually became mine. Regardless, it has moved with me across towns and countries, and seen me through many daily breads.