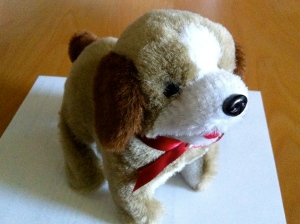 You’ve probably seen one of these before: a plush, mechanical dog that walks a few steps, slowly sits down and then – WOOSH – does a backflip, lands on it’s feet and starts again (occasionally, it lands on its side or head, and then just flails its legs about until you rescue it). In earlier incarnations, it was probably a wind-up toy, but these days they are battery operated and so can go for a while.

I’ve had mine now for more than 10 years – another sister gift. It was inspired by a play that we attended together. We have had season tickets for theatre at various venues in Vancouver for 15 years and counting, and sharing theatre with my sister is one of the great joys in life. We’ve seen some wonderful, mind-blowing, moving and funny theatre that we talk about for hours, and also some horrendous, awful theatre that we talk about just as much.

It was in 2003 that we attended “It’s Snowing on Saltspring” at the Arts Club Granville Island. The play is a local favourite, and we were seeing it for the first time; other than the Christmas theme, we didn’t know much about it. I remember that we enjoyed it as a light holiday comedy (I’ll take that over a farce with a scheming maid any time).

In the last scene of the play, the stage is littered with small toys after some kind of madcap finale. As we were leaving the theatre, we walked by the stage (which, at that venue, is quite low and accessible to the audience). Near the edge was a mechanical toy dog, which I’d been admiring throughout the show. She said something like, “I dare you to take that.” I did a mock reach for it, feigned tucking it in my purse, and we laughed and headed home.

A few weeks later it was Christmas, and this mechanical dog was one of my gifts from her. Opening the box, I had a moment’s horrified thought: “Did she take it?” Then I realized it was brand new, and her idea of a memorable surprise. I was delighted and played with it throughout the morning. Those are the best kinds of gifts – big or small, but filled with meaning and fun.

Like so many of my objects, the dog has moved house with me and occupies a spot on my bookshelf where I see it frequently and smile. It doesn’t work as well any more, so I don’t play with it much for fear of a leg falling off or the gears grinding to a sad halt. But I’ll always keep it for the memory of that evening, that joke and that lovely and thoughtful gift from my wonderful sister.