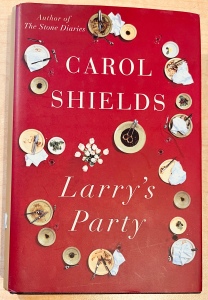 I first read this book in 1997; I splurged on a hard-cover (first Canadian edition, even), and read and enjoyed it immediately. A few years later, I listened to an audiobook version (on cassette tape, of all things) which is no longer available anywhere. It’s a book I often recall fondly, even some specific details, but have only read it those two times, more than 20 years ago. It felt overdue to revisit it.

Briefly, the novel tells the life of Larry Weller, born and raised in Winnipeg, twice married and divorced, one son. Larry starts out modestly working in a flower shop, but advances to landscape architecture with a speciality in garden mazes. Through the years of his life explored here, we get a portrait of a man growing and aging toward the end of the last millennium, before the Internet and social media, before 9/11 and Iraq and Afghanistan, before Covid. Shields is one of the best female writers I know for portraying complex and likeable (if flawed) male characters so well (Tom Avery in The Republic of Love is similarly marvellous).

In the intervening years since my first readings (including the audiobook version), I had recalled very vividly many scenes and bits of dialogue. The opening scene with Larry and the Harris tweed jacket; his experience in the Hampton Court maze (which inspired my own pilgrimage to Hampton Court on a trip to London); the scene with Larry going through customs and wanting to say, “stud duty” as his reason for visiting England; the titular party, with its awkward arrangement of seating for nine people around a refectory table; the ending. But there were also many pieces that I didn’t remember at all, so much of the book was fresh and engaging. Shields writing is crisp and clear (although she shares an unfortunate habit with John Irving of repeating pieces of the story unnecessarily), and she creates vivid and realistic characters that, even if you don’t love them, you like or at least understand them.

There are some curiously modern touches – Larry moves to Toronto late in the story, with the rationale that, “He could do his maze design work and consulting from (anywhere). Electronic outreach, instant communication; this was the nineties.” How innocent that all seems now, from a time when email and faxing was seen as the pinnacle of technological advancement. And this comment, from the flower shop manager bemoaning the imminent takeover by an international chain: “Wouldn’t you think, if they kept up with modern management, that they’d have figured out that it’s people who matter!” 25 years later and employees and leaders around the world are still bemoaning that lack of understanding.

I’m motivated now to revisit The Stone Diaries, as another book I really enjoyed but have never re-read. Perhaps next year.

Fate: this is one of those I’ll-never-part-with-it books, so it will remain on my burgeoning shelf of favourites.